SHE
with Weronika Gęsicka’s participation

Photographs are “privileged moments” plucked from time and space by photographers—or so Susan Sontag reminds us. Often in photographic history and elsewhere, that authorial privilege has been afforded to men. Refreshingly, the moments presented to us at Elizabeth Houston Gallery between October 9th and November 16th are decidedly women’s. With works from twelve artists on view, SHE mediates between degrees of abstraction and experience from a feminist, and at times feminine, perspective, holding a mirror up to the world around us.

The group exhibition brings together an international roster of emerging and established photographers: Arielle Bobb-Willis, Chloe Rosser, Svetlana Bailey, Cig Harvey, Corine Vermeulen, Daniela Edburg, Sally Gall, Laura Pannack, Sandra Kantanen, Weronika Gesicka, Liz Nielsen, and Kathrin Linkersdorff. While their imagery is divergent—there are portraits, landscapes, and still-life of sorts—the selection of works in SHE underscores the relational capacity of the photographic medium, mapping its connections to ourselves and others, bodies and objects, and reality itself.

Through the subtleties of metaphor and gesture, Harvey’s oeuvre tells a tale of domesticity spun with magical realism. Her image Sadie & the Birdcage reflects Harvey’s familial relationships, offering viewers a psychological portrait of adolescence: a young woman whose glimpse through the bars of a birdcage is both dainty and direct, a white bird emblazoned on her sweater just above her heart. Both Bobb-Willis and Pannack delve into the complexities of human relationships, too. The former’s images play with shape, movement, and vivid color to convey their subject’s own psychological states. Treading the thin line between fashion and art, New Jersey, 04, 2017 captures the disjointed motion of falling in photographic space as a sign of uncertain selfhood. By contrast, Pannack’s photography charts her own relation to her sitter; the photograph Nancy captures the latter’s glance cast both outward and inward, simultaneously, suggesting her status as both object and subject of the frame.

Rosser and Bailey, meanwhile, consider the objecthood of bodies, so often female, within the photographic gaze. The former sculpts with human flesh, transforming the familiar terrain of the body into uncanny forms. Her image Function 1,1 is both beautiful and grotesque, intimate and anonymous, and entirely genderless. Bailey, on the other hand, draws metaphorical and cultural parallels between fruit and female form, 66% of human DNA is identical to that of bananas, after all. She explores all of the associations of femininity with ripeness, tenderness, and sweetness in the aptly titled Woman with Fruit.

Our relationship to place is mined in Daniela Edburg’s series Uprooted. Her photographic narratives of contemporary life in the American West pair the migration of persons with the introduction of botanic species from elsewhere to the landscape, mixing geographic and social reality with fiction; fiction that is often crocheted by the artist herself, at that. In Bound, Edburg’s subjects lean against each other atop a blanket of cheatgrass—the dominant species in over 101 million acres—of the artist’s design.

Gesicka, Gall and Linkersdorff take on our relation to objects in the photographic frame, while Kantanen, Nielsen, and Vermeulen tackle photographic reality itself. Gesicka plumbs memory in the vintage photographs she discovers, doctoring them to merge inanimate objects and subjects in surreal ways. Gall’s found objects, by contrast, are in fact other people’s laundry drying on the line against the backdrop of blue skies. Her image Striptease is both very private and very public. Linkersdorff’s pressed flowers are submerged in water their inky colors running, hinting at the growth and decay of all natural cycles.

Both Kantanen and Nielsen manipulate their images, stretching the boundaries of photography and it depictions. While Kantanen pulls pixels across her digital landscapes, Nielsen works directly with light on paper in the analog color darkroom, completely cameraless. But both photographers present realities to the viewer that, while photographic, are far from real. So, too does Vermeulen, whose large-scale abstractions result from the reactions of household chemicals on exposed film. These she pairs with portraits that similarly distort their subjects through clever analog interventions.

That SHE is so expansive in its aesthetics and artistic investigations should come as no surprise. There is no quality or characteristic after all, that all women share. But as Sontag notes, to photograph is to appropriate the thing photographed. And it is high time that women occupy that subject position, appropriating according to their own desires.

Robyn Day is a Chicago-based photographer and freelance writer for Photograph. She previously wrote art criticism for WBUR, Boston’s NPR news station, and Art New England. She works in external affairs at the Art Institute of Chicago. 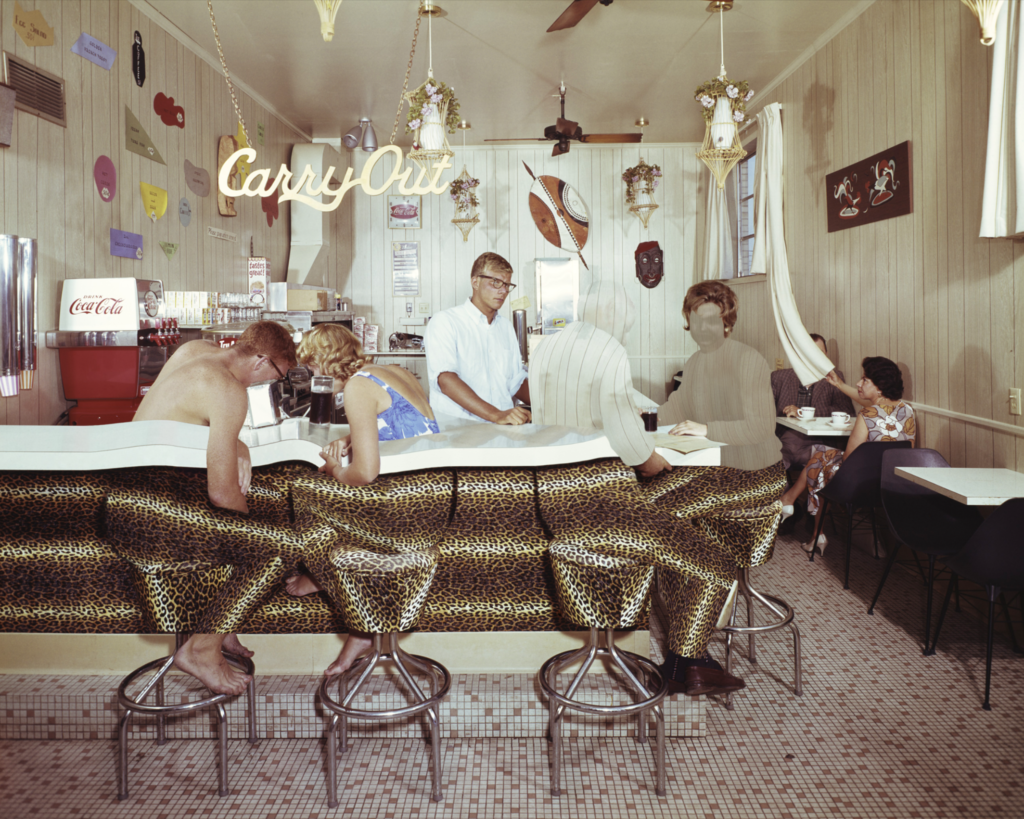