“Chasing a White Horse” series part of REFUSAL project will be showcased at the 12th edition of the Gwangju Biennale.

The photographic series shines a light on Georgia, in the aftermath of the Mikheil Saakashvili’s departure in 2013. In the upheaval, many of the ex-president’s projects were placed on hold, including those designed to promote rapid modernization within the country. The futurist architectural visions that had begun to crop up all over the Georgian landscape, were left in a state of incompletion. Milach’s series traces the legacy of the authoritarian ruler, whose abandoned dreams still haunt the Caucasian country.

The 12th Gwangju Biennale will see 165 artists from 43 different countries participate in a series of seven exhibitions and the GB Commission exploring the political, cultural, physical and emotional concepts of borders in today’s global community. Multiple curators and creatives have been brought together to offer diverse perspectives and projects, inspired by the concept of “Imagined Borders”. 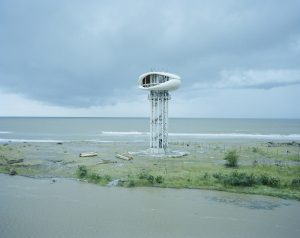 Rafał Milach, from the ‘Chasing a White Horse’ series, 2013